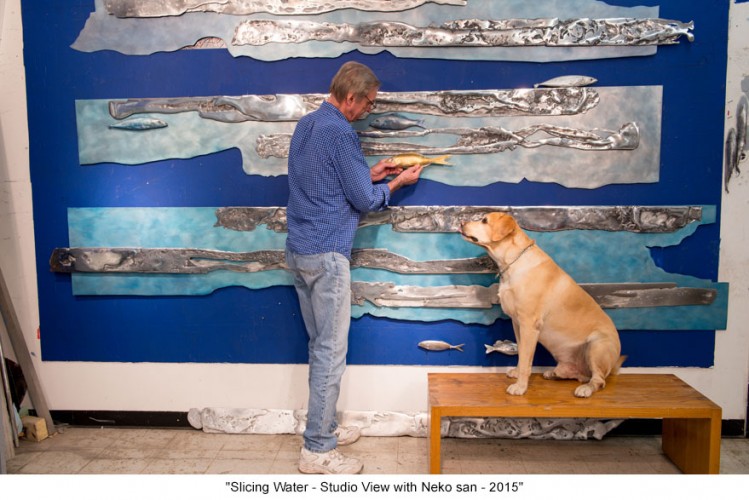 The Art and Art History Department was deeply saddened by the unexpected passing of Professor R.F. Buckley, who died on Friday, October 9, 2015 at the age of 72. For nearly four decades his life has been inextricable intertwined with the formation of young artists in South Florida. His passing leaves the hollowness within our academic and artistic community, as Prof. Buckley’s legacies are too many to count. His absence will be felt by so many who relied on his mentorship and support. He is survived by his two beloved sons Finn and Thaddeus.

RF. Buckley was born in Cleveland, Ohio and did his undergraduate work at the Cleveland Institute of Art where he received his B.F.A. degree. He majored in Sculpture with a minor in Painting. After his junior year he was given a summer scholarship to attend The Skowhegan School of Painting and Sculpture in Skowhegan, Maine. Upon graduating from Cleveland Institute of Art, he accepted a Teaching Assistantship position at the University of Southern California in Los Angeles. During his second semester at USC, R.F. Buckley was given full responsibility of the sculpture department teaching all levels from freshman to graduate students as a sabbatical replacement for the sculpture professor.

After one year at USC, he accepted a Fellowship from the Rinehart School of Sculpture, Maryland Institute College of Art, Baltimore, Maryland where he received his M.F.A. degree. Upon graduation, he was offered a position teaching sculpture at Washington University, St. Louis, Missouri. He taught at Wash U. for seven years helping to revitalize both undergraduate and graduate programs. After leaving Wash U., He accepted a position teaching Sculpture and Painting at Florida International University, where he has been employed for nearly four decades as head of the sculpture program.

Prof. R.F. Buckley has been nationally renown for his large-scale aluminum sculptural works. Recently, he was invited to attend ABANA 2016, the national conference of the Artist-Blacksmith’s Association of North America to showcase his technical and forging abilities to conference participants. His numerous public works are a true testimony to his rigorous studio practice and life commitment to art.