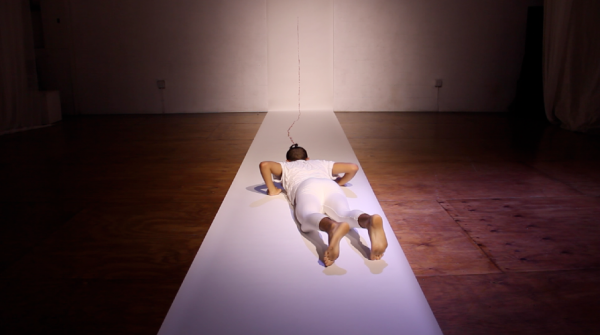 College of Architecture + The Arts alumnus Guillermo León Gómez (BA ’12) is the August Artist-In-Residence at Inkub8, an alternative space in Wynwood specializing in hybrid experimental, movement, physical theatre, and sound. For the month of August, Gómez has been provided by Inkub8 with a space to create work. The 2014 Inkub8 (open-studio) Residency Program is a four-week residency in Miami’s Wynwood arts district that offers time, space, and a modest stipend to artists, who teach classes and exhibit works in exchange. (Source: Inkub8)

The following is an artist’s statement provided by Gómez:

Guillermo León Gómez is interested in replication, consumerism, and artificiality. His belief is that identity, as well as objects, can be commodified. Working in video, photography, and performance, his process begins with research. His work is then reactionary and improvisational depending on the nature of the subject. His performances are generally interactions with objects–which, many times, carry strong associations of gender normative roles. He attempts to disrupt this social conditioning, while offering a new understanding on symbology, politics, and economy. Gómez was born in Miami, FL. He received a B.A. in Art at Florida International University. His work has been included in group exhibitions at Miami Beach Urban Studios and Little Haiti Cultural Center. He lives and works in Miami. 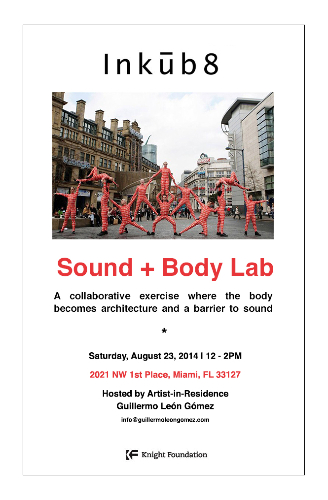 This Saturday, Gómez will host a Sound + Body Lab. Gómez describes it as “a workshop where [he] teach[es] the basics of sound perception followed by a group exercise to build architectural structures to muffle and block sound.” On Saturday, August 30th, a final exhibition of his work as an Inkub8 Artist-In-Residence, along with HIGH TEA, a closing reception, will occur at the space. The bar at the closing tea party will transform into a digital projection, exposing the physical effects of consumption, emptiness, and the passing of time. The evening will end with a balancing act of overindulgence, a live performance of high tea leading to an eventual low.

The final exhibition and reception of Guillermo León Gómez’s work will take place on Saturday, August 30th at 8PM at Inkub8: 2021 NW 1st Place, Miami, FL 33127. A $15 donation towards Inkub8 will be asked for at the door.