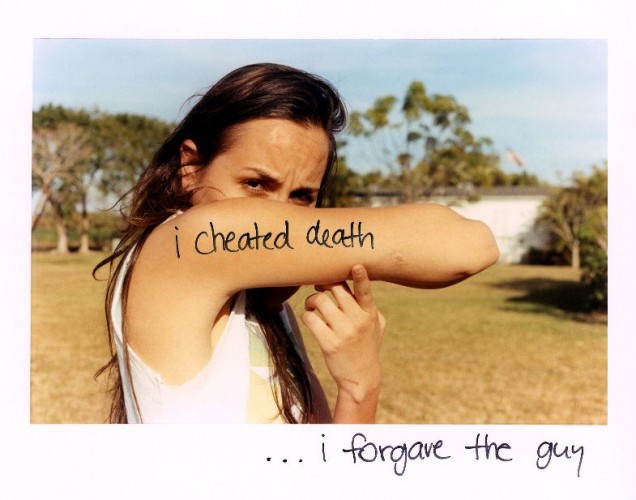 FIU Bachelor of Fine Arts student Paola Katherine Rodriguez has continued exhibiting a project that emphasizes the healing processes of survivors of victimization, such as domestic violence, child abuse, sexual assault, and rape. Entitled Broken Free, the photography series was started by Rodriguez in September 2013 and shown both at the FIU Photography Club’s Photojournalism Exhibition (March 2014) during FIU’s Take Back the Night event (April 2014) and at the Graham Center Art Gallery as a solo exhibition (May 2014). Since its beginning, Rodriguez has photographed and worked with seventeen survivors of abuse – ranging from the age of nineteen to forty-six.

“As a survivor of abuse and rape,” said Rodriguez, “I realized that an important thing that was taken away from me . . . was my voice. In my photography series Broken Free I try to promote awareness of victimization, while empowering survivors to speak out.”

She said that she and her participants share their personal experiences and feelings as she photographs them for the project. Rodriguez then invites them to voice themselves, expressing their thoughts and feelings, through writing on the photographs. “While an image can often speak for itself, I am interested in the text’s ability to become like a diary entry, allowing for intimacy, openness, and vulnerability, providing insight as to where each person stands in their healing process.”

“With Broken Free,” said Rodriguez, “I have been exploring the ways in which photography, specifically the method of combining image and writing, provides and promotes engagement and healing. The project aims to help survivors rediscover their identity, to help them understand that they are not alone, to be able to turn their negative experience into something positive, to allow them to speak out (to express anything they feel they should have said then, or must say now) and break free. It is said that ‘domestic violence (and other forms of victimization) thrives in silence.’ To me, it is important for all of us to break the silence. It is also important for people to realize that nobody is ‘immune’ and that this can happen to anyone, regardless of age, gender, race and social background. ”

Rodriguez has shown Broken Free at the last three BFA semester reviews. In the Fall 2014 review, Rodriguez was awarded a scholarship for placing amongst the top three of those reviewed. Currently, Broken Free is on display at the College of Architecture + The Arts | Miami Beach Urban Studios in Passsages: BFA Thesis Exhibition, Spring 2015.