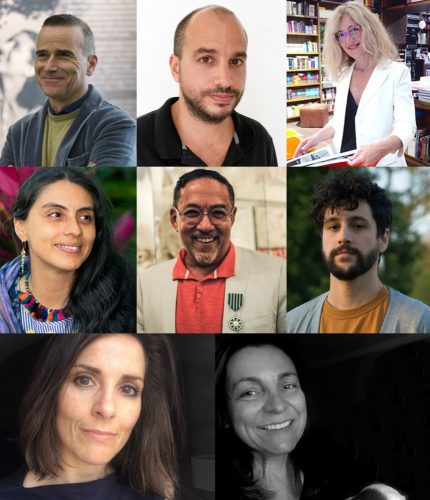 The FIU Department of Art + Art History is pleased to announce the hiring of outstanding faculty this 2019 – 2020 academic year.

Guido Fiorato is an internationally renowned artist and designer. He is currently Professor and Director of the Ligurian Academy of Fine Arts in Genoa, Italy.

Edouard Duval-Carrié is an internationally acclaimed artist. His accolades include: • Ellies’s Top Award • Chevalier De L’Ordre Des Arts et Des Lettres, France • US Artists Award • Cultural Consortium – Visual Arts Fellow • Southern Arts Federation Visual Art Fellow Edouard Duval-Carrié was born in Port-au-Prince. His family emigrated to Puerto Rico while he was a child during the François Duvalier regime. Duval-Carrié studied at the Université de Montréal and McGill University in Canada before graduating with a Bachelor of Arts from Loyola College, Montréal in 1978. He later attended the École Nationale Supérieure des Beaux-Arts in Paris, France, from 1988 to 1989. He resided in France for many years and currently lives in Miami, Florida. “I didn’t want to go back to Haiti because of the political turmoil there. I have two kids,“ he explains. Instead, he resides among Miami’s substantial Haitian immigrant population and maintains cultural ties to his homeland. His works have been exhibited in Europe and the Americas.

Jahaira Ríos Campos y Gálvez is a professional artist in photography, mixed media and performance art. Professor Gálvez has been featured in numerous professional exhibitions such as Art Basel, MOCA, the Projects/ South & FAT Village and many others. She was previously a teaching artist for eleven years at Perez Art Museum Miami. Gálvez teaches from a love of investigation, experimentation and self-reflection. She looks to inspire the spark of wonder in others. Through her artwork she delves into themes pulled from childhood experiences, motherhood, investigations and reflections into her indigenous heritage. Her work stems from her desire to touch on delicate subjects in a way that provokes conversations and reflection. She believes art is medicine. Gálvez received her B.F.A. from New World School of the Arts (University of Florida) and her M.F.A. from Barry University, both in creative photography

Jonathan Perez is a media artist whose works use sound and video to explore post-appropriation moving image aesthetics in networked environments. He creates single-channel works in addition to multi-channel sound and video installations. His videos and sculptures have previously been exhibited at The Boca Raton Museum of Art 2016 All Florida Invitational, Vox Populi Gallery in Philadelphia, Flux Factory in NYC, and Hallwalls Gallery in Buffalo. In addition to independent practice, Perez frequently collaborates with the artist collective Troll Food. Prior to joining the Communications, Architecture + The Arts Faculty at FIU, Perez taught film production and theory at The University of Central Florida. Perez received his MFA degree in Art Video from Syracuse University in 2015.

Jennifer Printz uses photography, printmaking, and drawing as differing means to observe her world and unifies them together to make poetic works that reflects on the structure of the universe. These beautiful creations have been exhibited widely including recent exhibitions at the Spartanburg Museum of Art, Chroma Gallery, and as far away as Portugal, Egypt, and Russia. Printz has completed artist residencies in Paris and Malta, both locations having a great influence on her current practice. Her work has been included in publications as diverse as Tricycle and the Carolina Review. In 2019, her studio practice was included in in-depth articles in “In Her Studio” and “Peripheral ARTeries”. Printz’ scholarly output includes papers given at the SGC International, College Art Association, and Southeastern College Art conferences. The Norton Simon Museum included her essay “Print University” in Proof: The Rise of Printmaking in Southern California. Printz received a MFA from the University of Georgia. She has taught and lectured at institutions across the United States including workshops at the J. Paul Getty Museum. Printz has also been an active arts leader serving as president of the Los Angeles Printmaking Society and Vice President of External Affairs for SGC International and was awarded a NCAA Emerging Arts Administrators Fellowship.

Silvia Pease is an interdisciplinary artist, designer, theorist and social entrepreneur, as well as a founder of Design, is Change (2015-ongoing). This project features FIU Citizen Designers teaming up with non-profit organizations. Pease teaches courses in socially engaged design stimulating discussions on relevant socio-cultural issues to influence a positive change in our communal perspective. In 2018, Pease was awarded the prestigious fellowship at IDSVA Institute for Doctoral Studies in the Visual Arts, to become a Ph.D. candidate in Philosophy, Art Theory and Aesthetics. Prof. Pease’s research and writings focus on empathic praxis in design and the role of the arts in society. Currently, Silvia is researching the graphic representation of Latin American women in Agitprop. Pease holds an M.F.A. in Multimedia Design and a B.F.A. in Fine Arts and Design, both from the University of Miami along with graduate design certificates from Schule für Gestaltung Basel. Silvia Pease believes that art and design should create a space of engagement and possibilities where we can negotiate a richer knowing. In 2013-16, Pease worked as a design contributor on effects of the reversal of post-colonialism and color perception in native communities to bring attention to marginalized native communities of South America creating a dialogue on color aesthetics and perceptions.