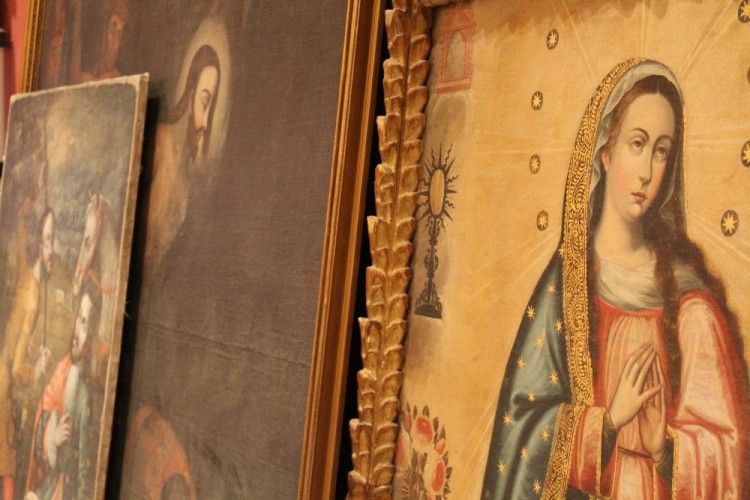 Corpus Christi Church’s Father Jose Luis Menendez has collected Latin American colonial artworks over the years, as well as documents related to Florida’s Hispanic history. The 105 paintings and sculptures and 410,000 historical records will be on display at La Iglesia-Museo Perú de Nuestra Señora de la Merced, upon completion of the building. This will become one of the largest collections of Latin American art and history.

The four-story La Merced building is a replica of an old Peruvian church. When finished, La Merced, which seats up to 200 people, will serve as a religious space, museum, and concert hall. Inside the building are a facade made from coral from the Dominican Republic, cedar doors from Brazil, carved cedar columns from Bolivia, and clerestory windows made of alabaster from Turkey. Although made in the modern age, these structural pieces are meant to reflect the era of which the collection originates, as well as resemble the pieces of an old colonial church. (Source)

The collection of historical records at La Merced are equally as impressive as the antique artworks and modern structural elements. The records collection includes a 1492 letter from Spanish King Ferdinand and Queen Isabella, who commissioned Columbus’ voyages; a letter from Spain’s King Philip II to the governor of Florida written in 1593 (one of the oldest known letters about Florida); the first constitution of Cuba (1901), swords and uniforms from the 19th century battle for Cuban independence, and an 1818 letter from Jose de Coppinger, one of the last Spanish officials ever to rule Florida. (Source)

Dr. Carol Damian has been selected as the curator of the colonial art collection, deciding which artworks are displayed where in the space. She has much to choose from in the collection that includes paintings and statues made in the 17th and 18th centuries and coming from various Latin American countries like Mexico, Bolivia, Peru, and Ecuador.

“To be able to work with a premier collection of Colonial Art,” said Dr. Damian, “in a city that can easily claim it as heritage to be appreciated and celebrated, is as much an honor as a pleasure for me.  As a scholar who has long been dedicated to Colonial Art, especially of the Andes, it is also wonderful to research these works in person just miles away, and not in a far-away land.”

Joining Dr. Carol Damian and Father Menendez is Alfredo Garcia, who, in addition to teaching at FIU, is a PhD student in sociology at Princeton University. He is in Miami to research on how art changes neighborhoods. Garcia selected Wynwood as his focus, and he has honed in on Corpus Christi Church, which is known as a parish of Allapattah, Wynwood, and Edgewater. He met Father Menendez and Ray Zamora – who manages the Colonial Florida project – and decided to participate in making their ideas concrete. Garcia is responsible for managing Colonial Florida’s social media on Facebook, Twitter, and Instagram, and he is currently working on a website to represent the project.