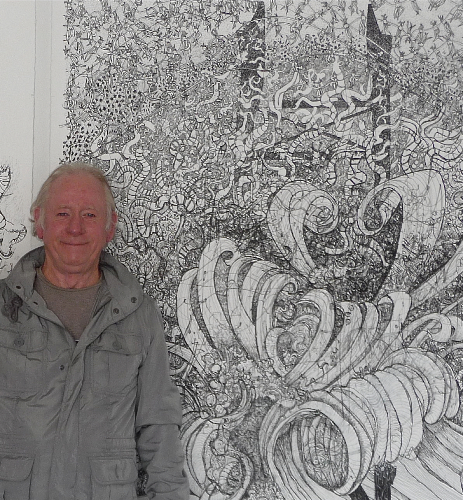 Clive King, Professor Emeritus of Fine Art at the College of Architecture + The Arts, is an artist and a former Chair of the FIU Art + Art History Department (1992-98). He has also been the Chair of Visual Arts (1987-92) and the Chair of the Visual Arts Program (1979-87) at Oxford Brookes University and a Course Leader for Communication Arts at the Salisbury College of Art in England.

King has been featured in publications such as the current Manifest International Drawing Annual, 100 Southern Artists, Arts Review, Studio International, The Miami Herald, and The Oxford Times. King was also featured on the DVD “In and out of the Box,” along with current chair Jacek Kolasinski, and has illustrated work for Charles Baudelaire’s Les Fleur Du Mal (The Flowers of Evil).

Some of King’s artwork is included in collections across the United States and Europe, such as those of the Museum of Modern Art (MOMA) Wales and Florida International University.

He was awarded artist’s residencies at the Yorkshire Art Association in Bradford, the British American Art Association in Philadelphia, and the University of Minnesota, and has twice been the recipient of an annual art fellowship from the South Eastern College of Art Conference and the Florida Individual Arts Fellowship. He has given lectures at institutions like the Royal College of Art in London, Pratt Institute, Weisman Museum of Art, and Virginia Commonwealth University. He has held many drawing workshops at notable institutions across the country, including the Kansas City Art Institute, the University of Utah, the South Dakota Museum of Art, and the University of Alabama.

King has also exhibited in both solo and group exhibitions throughout his career as an artist. The list of venues that have exhibited his work includes the Barbican Art Center, London, MOMA Wales, Jacksonville Museum of Modern Art, the Patricia & Phillip Frost Art Museum, and the Whitworth Art Gallery in Manchester.

King studied at the Goldsmiths College of Art in London and the Exeter College of Art, completing his studies in 1966. He has received the “Wales Now” National Exhibition award twice, the British Art Association travel award, the Oxford Brookes University Creative Development Award, and the FIU Provost’s Research Award.

King is a member of the College Art Association of America and the South Eastern College of Art Association. He retired from full-time teaching in 2010, and devotes his time to preparing for new exhibitions and running intuitive drawing workshops throughout the U.S.