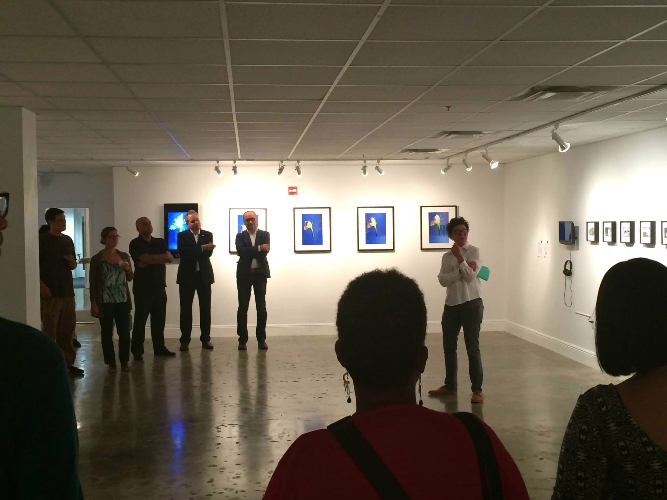 On Thursday, May 15th, Maria Elena González (FIU BFA ’80) introduced Digital Oculus to a crowded room of visitors at The College of Architecture + The Arts | Miami Beach Urban Studios.

An internationally acclaimed artist, González’s work is included in public and private collections throughout the world, and has been exhibited in major museums and galleries in the United States, Switzerland, and her native Cuba. Most recently, her “Tree Talk Series” was included in the 30th Annual Ljubljana Biennial of Graphic Arts at the MGLC-International Centre for Graphic Arts, Ljubljana, Slovenia, where it was awarded the Grand Prize in September 2013.

At the reception for Digital Oculus, González spoke about the digital realm, and their influence on artists and their creative processes. Additionally, visitors at the Miami Beach Urban Studios were invited to converse with González. One guest engaged in deep discussion with González about technology’s place in the art world, and how the historical significance of an artwork is affected by the passage of time.

After the reception for Digital Oculus, alumna Marilyn Loddi (BFA ’14) performed her piece “Eggplantian Spring Meditation” at the Washington Avenue entrance of the 420 building.