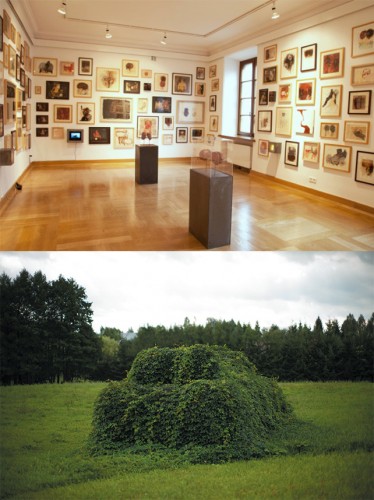 The FIU Art + Art History Department has initiated another international exchange with its counterpart the Academy of Fine Arts in Warsaw, one of the leading institutions of art and design in Central Europe. We are fortunate to start this collaboration with a presentation of two distinctive bodies of work by Professor Pawel Nowak and Dr. Prot Jarnuszkiewicz, which will open on Saturday, September 5th at The Patricia & Phillip Frost Art Museum.

Pawel Nowak and Dr. Prot Jarnuszkiewicz are both professors from the Academy of Fine Arts in Warsaw. Professor Nowak is the Deputy Rector of the Academy, and Dr. Jarnuszkiewicz is the Rector’s Proxy for International Cooperation.

In his exhibition Transfusion, Professor Pawel Nowak will show a collection of wax works by the artist that have been “dyed red to strengthen associations with the carnal,” as written by art critic and curator Eulalia Domanowska. The artworks emphasize two different, impersonal sides of human relationships – the biological and the statistical, the latter of which is expressed through PESEL numbers (Polish Powszechny Elektroniczny System Ewidencji Ludności/Universal Electronic System for Registration of the Population numbers), which are assigned to an individual in 11 digits. In Transfusion, human feelings do not play into neither this facet nor the biological facet of human relationships. However, the absence of feeling in Nowak’s work reminds viewers, ironically, of the existence of human feelings, especially dreams and love, which the artist has highlighted in his previous works. (Source: Piece by Eulalia Domanowska in a catalog for Transfusion)

Alongside Nowak, Dr. Prot Jarnuszkiewicz will exhibit traces, a series of photographs. In traces, Jarnuszkiewicz has photographed “banal situations,” as he put it. Jarnuszkiewicz finds value in a space on its own, either without any action involved or during the aftermath of an active event in the space. “Many people in a space just look, while my ideal is to see,” said Jarnuszkiewicz. “It is photography (me + the camera) that allows me to see something more in [the space].” traces captures the atmosphere of places and events, as Jarnuszkiewicz treats each space photographed as a “self-sustained being with feelings.”

These two solo exhibitions make up one of a number of projects that is linking FIU to the Central European cultural and academic scene.

In 2014, Assistant Professor Dr. Alpesh Kantilal Patel took a group of FIU Art + Art History students on a study abroad trip to Germany and Poland, where students attended lectures by prominent gallerists and scholars, visited contemporary art studios and galleries, and had the opportunity to explore the 8th Berlin Biennale of Contemporary Art. This year, Dr. Patel received a Fulbright Research Grant and is currently in Poland until Spring 2016 to study the country’s arts.

Chair of FIU Art + Art History Jacek Kolasinski has also helped connect FIU to Central Europe. In 2014, he helped spearhead the development of an academic partnership between The FIU College of the Architecture and Arts (CARTA) and the Art Academy of Latvia. As one of the inaugural joint projects, he curated the exhibition Riga and World Cities at The College of Architecture + The Arts | Miami Beach Urban Studios, and, in June 2014, he was appointed the honour chair presiding over MFA and MA thesis examinations in Riga.

Earlier this year, Chair Kolasinski was awarded a grant by the Miami-Florida European Union Center of Excellence, along with a Faculty Research Award 2015, for his proposal “Pan-European Identity in Latvia.” His exhibition at the Art Academy of Latvia, entitled Lapidarijs (or Lapidarium in English; and running until Saturday, October 7th, 2015), is the result of the research he conducted. In addition to attending the exhibition reception in July 2015, Kolasinski attended the US Independence Day celebration that was hosted at the Riga US Embassy, along with Professor Aleksejs Naumovs, the Rector of the Art Academy of Latvia.

Thus, the opening of the exhibitions by Professor Nowak and Dr. Jarnuszkiewicz at FIU is fitting for a university that is continuously creating this global connection with Central Europe.

Professor Pawel Nowak and Dr. Prot Jarnuszkiewicz will attend the opening reception event at The Patricia & Phillip Frost Art Museum on Saturday, September 12th, 2015. The opening event will run from 4PM-7PM. Free and open to the public.