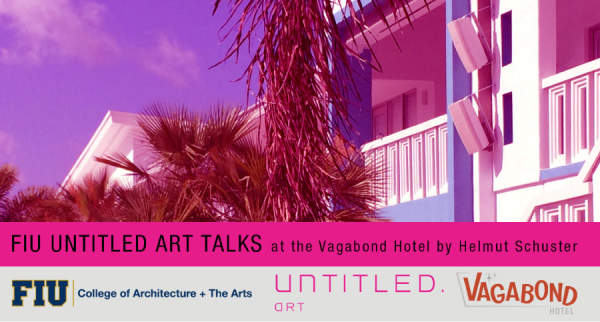 The FIU College of Architecture + The Arts has partnered with Helmut Schuster (owner of Gallery Schuster in Berlin, Miami, and Potsdam), Jeff Lawson of UNTITLED Art Fair, and Avra Jain of The Vagabond Hotel to provide a four-part, community-based lecture series called FIU UNTITLED ART TALKS. The lecture series – which will occur on the third Mondays of the months from August to November – will culminate in a CARTA exhibition, curated by Helmut Schuster, at UNTITLED during December’s Art Basel-Miami Beach week.

Terry Riley – architect, former Director of the Miami Art Museum, and former Philip Johnson Chief Curator of The Museum of Modern Art – will be the first keynote speaker of the FIU UNTITLED ART TALKS on Monday, August 18th at the grand re-opening of The Vagabond Hotel. CARTA will provide innovative, “pop-up” cultural activities throughout the hotel that showcase the talents of the College’s faculty, students, staff, and alumni. This will include – but will not be limited to – live music, video and multimedia installations, interactive art, design exhibitions, dance, and staged readings.

FIU UNTITLED ART TALKS are co-sponsored by UNTITLED, produced by Schuster Galleries, and hosted at the Vagabond Hotel.