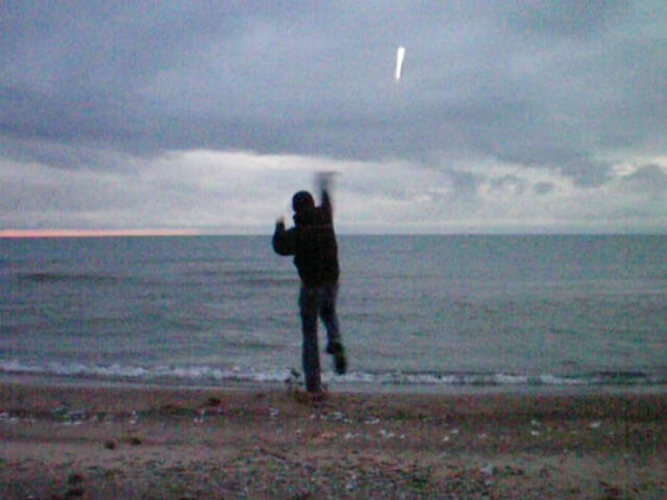 Cooper and Bellas previously collaborated in 2006 for a series of performances revolving around Cooper’s first solo show, Middle Management, at Monique Meloche Gallery. In this current showing, Bellas is showing video work entitled “AN INDIVIDUAL THROWS A FLASHLIGHT INTO LAKE MICHIGAN, WHERE IT IS LEFT TO FLOAT BENEATH THE SURFACE OF THE LAKE.” Bellas straddles sentiment and intellect through his multimedia practice, casting everyday objects as ostentatious and sometimes iconic signifiers. Filmed in 2010 in New Buffalo, Michigan while Bellas was an artist in residence at the School of the Art Institute of Chicago’s Roger Brown House, this video work explores the resonance of memory and the necessity for connection. (Source: Monique Meloche Gallery)

Stills from “AN INDIVIDUAL THROWS A FLASHLIGHT INTO LAKE MICHIGAN, WHERE IT IS LEFT TO FLOAT BENEATH THE SURFACE OF THE LAKE” by Benjamin Zellmer Bellas.

The text that accompanies the video work is below:

“this endless searching
I will search no more

this looking for guidance
I will look no more

enlightenment?
I’ll feel my way forward through this abyss

answers are a useless pursuit
questions are the best answers to questions without answers
ineffable, intrinsic, private, and immediately apprehensible

Cooper invited Bellas to exhibit his work this year in “porcelain projects,” which is a dedicated black box gallery in the backroom of Monique Meloche Gallery. It was conceived of in 2014 to create an opportunity to exhibit film, video and new media art within the most domestic space of the gallery: the powder room. It offers the opportunity for audiences to experience video work in an intimate, non-traditional space as well as the potential of video to activate tertiary environments. The impetus for porcelain projects was to explore how an ongoing film program can function within the gallery, while demonstrating how film can live in a vernacular setting, such as the space of one’s home. Building on the momentum of on the wall (2010 – present) and newly inaugurated off the wall (2014-present), porcelain projects is an extension of the gallery’s interest in programming exhibitions in non-traditional spaces. (Source: Monique Meloche Gallery)