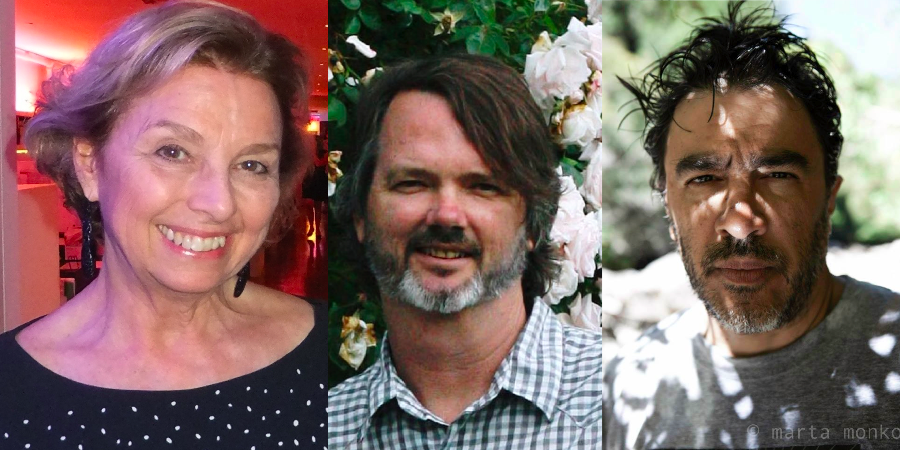 Some of our own College of Architecture + The Arts alumni are establishing their careers in New York. Among them are Renée Cooley (BFA ’78), Michael Rodriguez (MFA ’89), and Hugo Fernandez (BFA ’89).

Renée Cooley is currently a Design Principal at Cooley Monato Studio, an architectural lighting design studio in Manhattan that she has co-owned since 1993. The Studio offers lighting design and fixture specification, exhibition and display lighting, and custom fixture design. Cooley directs design projects within the Studio, which has as its clients architects, interior designers, and owners. Cooley Monato Studio has worked on a range of projects, from small boutiques to the largest operating mall in the United States. Besides this work with design, Cooley enjoys being a fine arts photographer.

“I am a collector of sorts,” said Cooley, “responding to the world in a straight-forward, but non-documentary way.” Her subjects over the almost 40 years she’s been photographing are varied, but many include relationships, home, environment, and portraiture. Cooley’s accomplishments include receiving numerous awards for lighting design including the 1993 IALD Citation for Lighting the Solomon R. Guggenheim Museum, to more recently receiving the 2011 GE Award of Excellence and the 2012 Lumen Award of Excellence. Cooley is thankful for her education through the FIU Department of Art + Art History. “My interest in lighting design emerged from my involvement in photography and its dependence on light as a medium,” she said. “And, my interest in photography emanated from my classes at FIU with Bill Maguire. But all of the art I studied at FIU – painting, art history, printmaking, as well as photography – helped me to contemplate what makes certain pieces of art or design work and, therefore, formed a terrific foundation from which I could look at my own work and follow a direction.”

Michael Rodriguez currently works as Chair of the Humanities Department and Professor at LaGuardia Community College – CUNY. As Chair, Rodriguez guides the faculty through the tenure and promotion process, and advocates the academic programs, which encompass the subjects of Fine Arts, Design, Philosophy, Communication Studies, Media Studies, Theater, and Music. Rodriguez has been an academic since 2003, but he has also been an “art[ist] with intent,” as he put it, since the age of twenty. He creates paintings on canvas and on paper, and focuses mostly on artistic process. Rodriguez has exhibited this work in locations such as Paris, New York, Chicago, and Miami, and has received a Pollock-Krasner Foundation Grant, New York Foundation for the Arts Grant, and a Joan Mitchell Foundation Grant. He currently has four works in the permanent collection of the Museum of Modern Art, NY. He named FIU Art + Art History faculty that made a collective impact on him, including Manny Torres, William Maguire, Ralph Buckley, Jim Cooper, Richard Duncan, and Dahlia Morgan. “I never could have anticipated how the art faculty literally changed my life and set me on the artistic path I am still on.”

Hugo Fernandez is currently an Assistant Professor of Photography and Visual Arts at LaGuardia Community College, Long Island City, NY. In his academic career, since 1994, Fernandez has taught courses like Beginning Photography, Intermediate Photography, Color Photography, Studio Photography, Introduction to Art, and Art in New York and Art Society. Additionally, he has written a federal grant for a study abroad trip to Chile for students, which came to fruition when twelve students recently visited the Patagonian wilderness, Santiago, and Valparaiso. Fernandez’s desire to create, according to him, stems largely from his experiences at FIU. “FIU filled me with a love for the creative life and love for the history of art and photography,” he said, “as well as experience with civic engagement, which has kept me active as an artist and a good citizen of my academic community.”