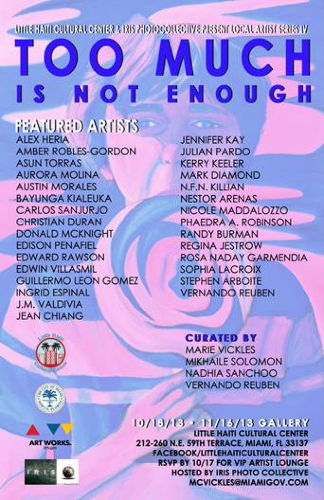 Too Much Is Not Enough will close at the Little Haiti Cultural Center on Friday, November 15th. The exhibit, which emphasizes the opposing themes of over-indulgence and scarcity, features the talent of some alumni of the College of Architecture + The Arts. In Too Much Is Not Enough, which is the first exhibition of the Little Haiti Cultural Center’s Art Basel season, the range of media is as diverse as the group of artists involved. The exhibition includes sculpture, textiles, and holographic images, among other media. One CARTA alumnus in the show, Guillermo León Gómez (’12), who received his BA in Art, is the only artist with a video piece in the exhibit. Called Speeding Train, the video explores commodity and capitalism through rushing, blurry visuals of merchandise on supermarket shelves. Gómez said, “. . . I had read Walter Benjamin’s The Work of Art in the Age of Mechanical Reproduction and I was extremely interested in the mass-production of goods brought on by the Industrial Revolution – the reason why I used the metaphor of the train.” Gómez had actually filmed the video during his senior year at FIU, in an Advanced Video Art course taught by Department Chair Jacek Kolasinski and Associate Dean for Cultural and Community Engagement and Professor of Architecture John Stuart.

Marie Vickles, the Visual Arts Coordinator of the Little Haiti Center, Vernando Reuben, Nadhia Sanchoo, and Mikhaile Solomon curated Too Much is Not Enough. Vickles said, “Can we have enough of the things we require without another forced to do without? Can simplicity be satisfying?” Sanchoo also poses an intriguing question: “When is too much not enough?” Reuben explained that the exhibition “contends with the ever-growing gulf between the Have’s and the Have-Not’s.” Solomon added, “Too Much is Not Enough is timely given our current state of affairs, as the extremities of scarcity and excess become more toxic.”

Too Much Is Not Enough will have a Closing Reception on Friday, November 15th at 6PM at the Little Haiti Cultural Center – Gallery: 212-260 NE 59 Terrace, Miami, FL 33137. Free and open to the public.

The featured image is provided by the Little Haiti Cultural Center.