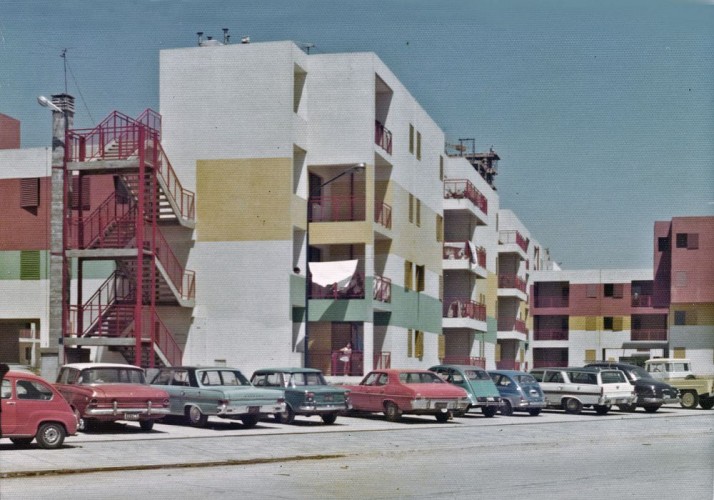 Associate Professor Eric Goldemberg compiled and produced a video of projects by Estudio STAFF, a prominent architecture firm that was based in Buenos Aires, Argentina and whose principals were Teresa Bielus, Jorge Goldemberg, and Olga Wainstein-Krasuk. This video is featured in a special exhibition at the Museum of Modern Art (MoMA) in New York entitled Latin America in Construction: Architecture 1955–1980.

The curatorial team of this show at MoMA consists of Barry Bergdoll (curator) and Patricio del Real (curatorial assistant) in MoMA’s Department of Architecture and Design, and Jorge Francisco Liernur of the Universidad Torcuato di Tella in Argentina and Carlos Eduardo Comas from the Universidade Federal do Rio Grande do Sul Porto Alegre in Brazil.

The team at MoMA have chosen Professor Goldemberg’s video to be included among other materials documenting seminal architectural projects of the era.

Estudio STAFF has greatly influenced the design of large social housing projects. Professor Goldemberg, whose parents are principals of the firm, has curated his parents’ professional archives, and has included imagery of these housing projects in the video provided to MoMA.

Professor Goldemberg is proud to see his parents’ work featured in an exhibit at this world-class venue. He is also pleased to now have had his whole immediate family involved with exhibitions at MoMA. In 2008, MONAD Studio / Eric Goldemberg + Veronica Zalcberg was selected as a finalist for the Young Architects Program. Their project for the PS1 Contemporary Art Center was exhibited in the museum.

“It feels . . . emotional. It is interesting to me that, in 2008, I had my own work exhibited at MoMA and only seven years after . . . [my parents’] work [is] there.” Goldemberg explained that when he came into his own, he “decided to move away from Argentina” and from his parents’ hometown to express his architectural vision. “But we were reunited at MoMA,” he said,” which is something that’s always going to be…with me.” Goldemberg, also, was proud to see his children enjoy the work of his parents. He especially wanted them to see the work of his father, whom they had never met.

To learn more about Eric Goldemberg’s involvement in Estudio STAFF’s exhibited work at MoMA, listen to the sound clips below. In the background, you will hear a machine producing one of Goldemberg’s newest projects, a 3D-printed cello.

How was the video footage of work by Estudio STAFF compiled? (1:17)