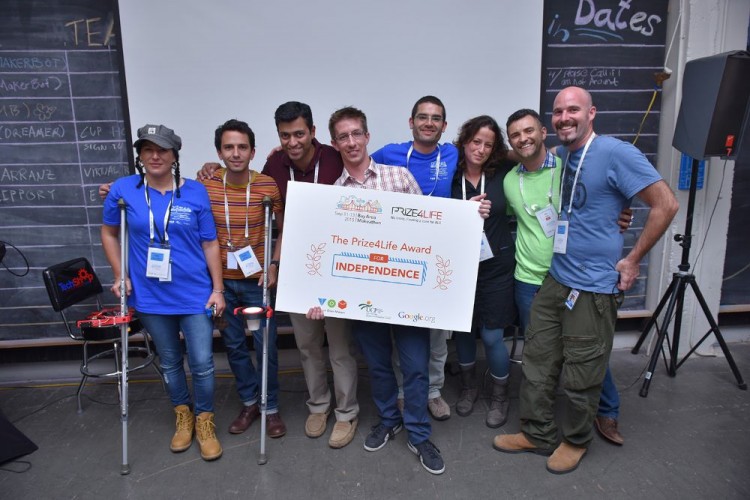 Master of Architecture student Matthew Wasala attended the Bay Area Makeathon for Assistive Technology, hosted by TOM, UCP of the North Bay, and Google.org. The event took place from September 11th to 13th, 2015 at TechShop in San Francisco. The team he participated in, called “Carry Crutches,” won the ALS Foundation’s Prize4Life Award for Independence.

The Bay Area Makeathon was a gathering of makers, designers, therapists and many other professionals that created solutions that assist and empower people living with disabilities. The makeathon (a marathon of making) was a 72-hour event where working prototypes were developed. At the Bay Area Makeathon, teams of technology experts, together with people who live with disabilities (or have an intimate knowledge of them), created solutions to specific challenges. The work space was equipped with all the machinery and tools needed for digital fabrication. The judges of the Bay Area Makeathon were Tom Chi, Dale Dougherty, Anupam Pathak, Jonathan Jaglom, Margaret Farman, Michael Dubno, Zebreda Dunham, and Shay Rishoni. (Source)

Wasala wrote about his experience at the Bay Area Makeathon. His recount is below.

When I first heard of this Makeathon event, I never had a doubt that I wanted to be involved. About a month before the event, I chose the “Carry Crutches” team. Back then, the name was simply “Cup Holder”, but the challenge was always to come up with a way to carry an open beverage while using crutches. I instantly thought back to the time I had to use crutches for a month. I remembered going to a party and having to have a friend follow me around all night with my drink and it was horrible. I imagined that this kind of solution wouldn’t simply be limited to crutches. What if the same concept could be adapted towards working in a car or even being on a motorcycle? It became clear that the cup holder could use an upgrade, and who better to lead the way than people that could use it most. 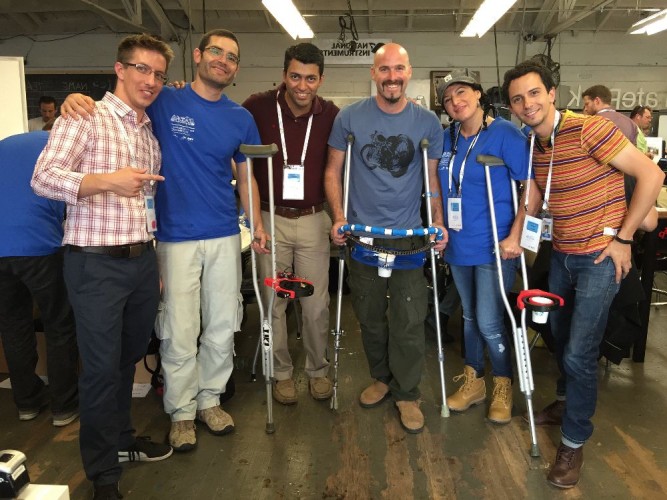 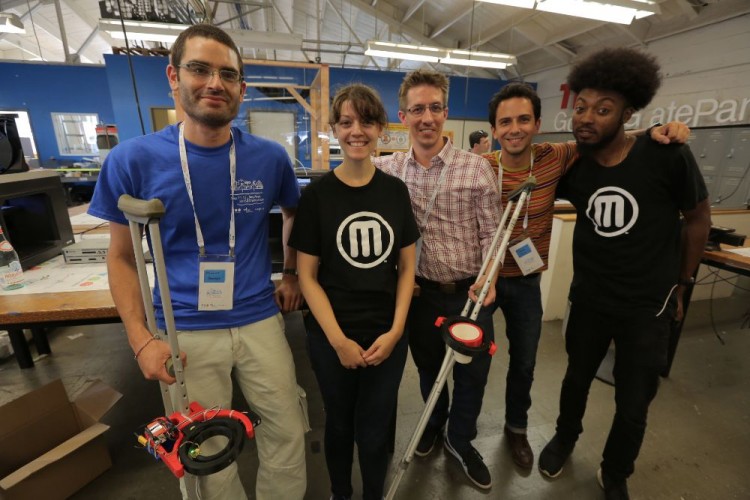 Here you can see some of the MakerBot team that was integral to our success as well. I constantly got them involved in the design process of the 3D prints since we didn’t have time to make mistakes. The first print I sent was something a little out of the box –  a 3D print that printed all as one piece but then moved freely at 3 points once it was taken off the 3D printer. The MakerBot team and I sat down and went over everything that I would need to design the model in order to make it happen, and we succeeded. That first 3D print was the catalyst for our team discussions and really got us moving in the right direction. They were able to teach me so much more about 3D printing over that weekend, and I am very happy that I can apply that towards everything I’m doing right now at The College of Architecture + The Arts | Miami Beach Urban Studios.

As for myself, I was very curious about how an architect would fit into this whole Makeathon event. I can say now, without a doubt, that I think every team should have had an architect on their team. There was actually another team that also won a prize that had an architect on their team, and I’d like to think that’s why they did so well. Architects are inherently creative problem-solvers with a depth of understanding that I think can be hard to find outside of architecture.

Being invited by MakerBot, I knew that I would be flexing my 3D printing muscles as much as possible, and I took charge of every 3D print we needed to come up with. 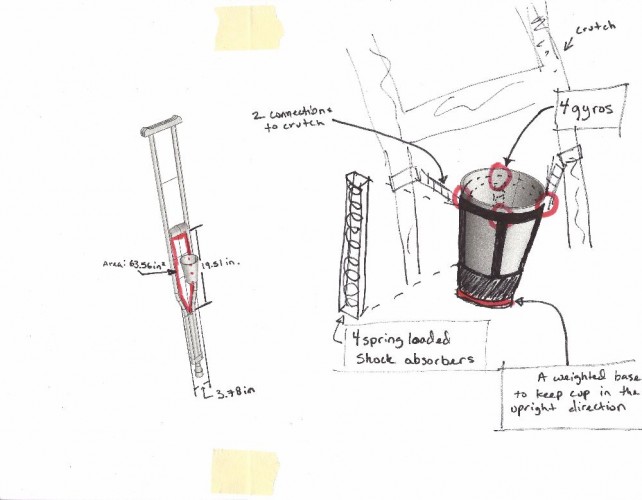 After our team got together and finished introductions, we started focusing on the problem. Ilan, our master builder, had brought a couple things he had played around with in Israel, mostly geared towards attaching a tray to crutches allowing someone to carry much more than a cup. When we got to the cup holder discussion, I was impressed and honored that everyone had been circulating my sketch and that it was going to be our starting point. The sketch was really rough, but the concept behind it was sound. My sketch being the base for the design, I went on to 3D print that first prototype that moved straight off the plate. This prototype solidified the concept and helped us all move forward to develop both an electronically controlled cup holder and a mechanical version. 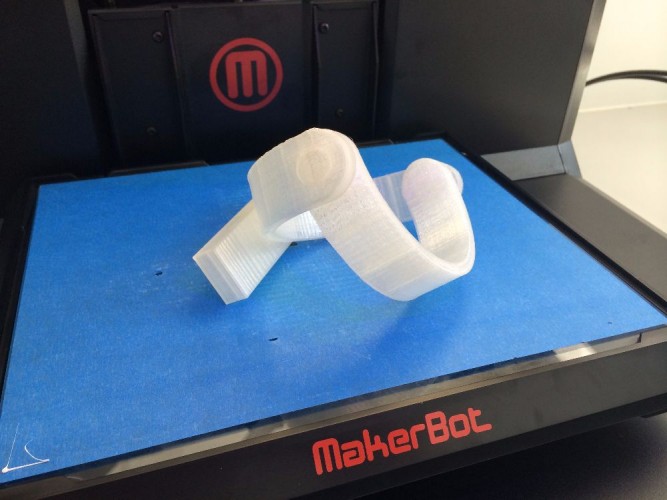 After doing the initial prototypes in Rhino, I worked closely with Tomas to design the whole thing in Solid Works and helped with creative solutions for every speed bump our team had along the way. I also constantly helped Ilan with 3D modeling and Laser Cutting, so he could realize his vision for the tray carrier and the crutch stop braking device that would help to hold a crutch in position if you let it go. I also took charge in creating the final presentation, putting the “architect’s touch” on the diagrams, renders, and final documentation. I even printed two big boards for our makeshift pinup board. The final presentation to the judges was a huge success and everyone showed a lot of interest in what we had accomplished. We went on to win the ALS Foundation’s Prize4Life Award for Independence, which recognized our project for enabling independence in a disabled person’s everyday life. It should be noted that out of 18 or so teams, 25% of them were given awards. 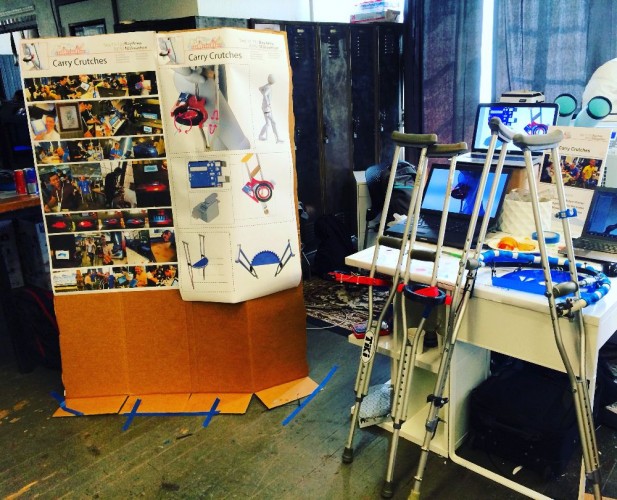 I enjoyed every moment of this experience and would hope to be able to do something like this again in the future. I bring back with me to FIU a new understanding of the industry and an architect’s role in it. I also am actively involved in seeing what we can accomplish at the new CARTA Innovation Lab at the Urban Studios. There are so many possibilities with this technology at our Miami Beach campus. I could imagine FIU combining the talents across disciplines – from engineering to computer programing to architecture – to develop our own kind of Makeathon. We have all the skills I encountered in San Francisco right here in our own university. I think it would be amazing to see what some of the best minds at FIU could come up with when given 72 hours.

The featured photograph with the ALS Foundation’s Prize4Life Award for Independence is provided courtesy of TOM Global.