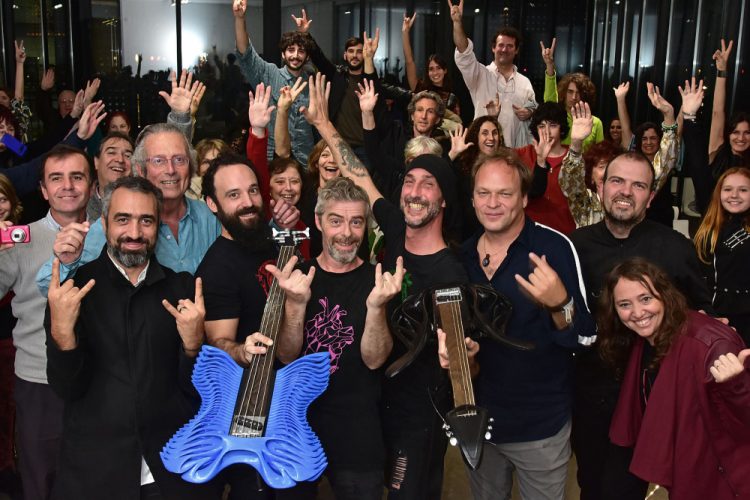 On July 28, Associate Professor and Digital Design Coordinator in the Department of Architecture, Eric Goldemberg, was interviewed and featured on the popular Argentinian national television architecture program, “El Arqui”. Professor Goldemberg gained heaps of recognition for his 3D-printed guitars and instruments, which have been used by a multitude of musicians and gained popularity internationally. 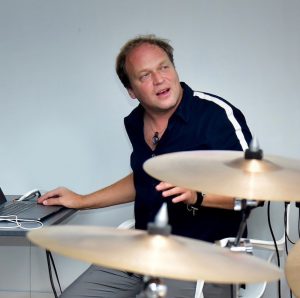 The instruments were printed through Goldemberg and his wife and partner, Veronica Zalcberg’s design studio, “MONAD Studio”, in collaboration with musician-luthier, Scott F. Hall. The idea behind them are to be unique and almost messy, but also extremely modern and precise devices that can not only enhance visual appeal, but performance. In his own words, the studio is “focused in spatial perception related to rhythmic effect, with a variety of explorations ranging from the scale of urban plans to buildings, and from landscape to art installations, product design and music instruments.” Recently, the curatorial committee of Bienal Internacional de Arquitectura de Buenos Aires (a biennial architecture event), selected their exhibition project titled “FEEDback” to be featured at the spaces of La Usina del Arte (an electrical power plant-turned-arts venue) during the Bienal.

What was it like to be interviewed and featured on “El Arqui”?

My wife and partner Veronica Zalcberg and I had a great time doing the interview for the architecture and design program “El Arqui” featured in Telefe, to a high rating National TV audience in Argentina.

We were joined by TV host Luisa Norbis and our guest-musician Sergio Berdichevsky, a hard-rock legend from Argentina. Sergio actually played our 3D-printed guitars in camera which demonstrated how our body architecture designs augment the musician’s expressions both in terms of sound and aesthetics!

We had a relaxed, interesting conversation about the feedback loop that our work creates between architecture, music and the human body through our innovative approach to posture and anthropometric adaptations in the forms of our curvaceous instruments.

How are you preparing your exhibition to be featured at La Usina del Arte? How do you feel about the opportunity?

This is a fantastic opportunity for me to share the work of MONAD Studio and my own personal research with the crowds in Buenos Aires! The Bienal Internacional de Arquitectura de Buenos Aires has a long, well-established tradition of bringing some of the very best exhibitions and speakers to La Usina del Arte, and this is my hometown. Additionally, both my parents had their work exhibited at the Bienal many times – their practice Estudio STAFF was also exhibited at MoMA in New York and so was MONAD Studio’s! It seems like we are involved in a longer-span conversation through the generations of Goldembergs. My father, Jorge Din Goldemberg, had also received the gold medal recognition for best work in the Bienal, given to him by famous Italian architect, Carlo Aymonino.

I feel very proud to be able to present my own exhibition entitled “FEEDback” where I will be creating a 3D mural installation that displays some of the music instruments that were printed at FIU Miami Beach Urban Studios (MBUS), as well as graphics and videos of the work of many outstanding international colleagues. This installation will also be the kickstart of a longer-term collaboration between FIU and the UADE Foundation – Universidad Argentina de la Empresa whose architecture students and faculty will work with me to build this ambitious, trans-disciplinar project.

The subject-matter of the show investigates the relation between the body, its technology-infused environment and architecture. It showcases architects, fashion designers, musicians, interactivity designers and stellar names such as Björk, Iris van Herpen, Viktoria Modesta, Anouk Wipprecht and my Department of Architecture colleague, Neil Leach. I will also give a talk as part of the Bienal’s main conference programme. This will be my 5th lecture in Buenos Aires since last June! We are also planning more concerts like the ones we did recently.

Here is a video of one of their concerts

What inspired you to open your own studio with this distinct modern style?

Veronica and I were students at the Masters program at Columbia University at a time when New York was the epicenter of the “digital revolution” in architecture, and we later taught the 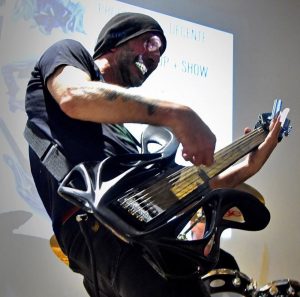 Masters too, after a tenure of 3 years as a designer for Eisenman Architects and Asymptote Architecture. Veronica worked on the World Trade Center project with a mega-team formed by the most avant-garde architects working with 3D technology at the time. These experiences, combined with the fact that I am the son of one of the pioneer architecture studios from Argentina, led to our own synthesis once we moved to Miami in 2006 and I became Digital Design Coordinator at FIU Department of Architecture. Since then, we have been able to explore all the 3D-printing and digital fabrication equipment our school progressively acquired, allowing me to deepen the design research as well as work with passionate groups of students in design-build experimental projects.

My practice has evolved from doing speculative, large scale projects such as MONAD Studio’s finalist project for MoMA’s Young Architects Program, to creating enigmatically beautiful, curvaceous and sharp sci-fi looking music instruments, sonic installations and sonic body prostheses like the ones we designed recently for bionic pop artist Viktoria Modesta and for the world-famous icelandic singer, songwriter and actress Björk.

But the most outstanding influences in the work of our design-research practice MONAD Studio are the electric music of Jimi Hendrix and the lush ecosystems in Florida, including the coral reefs and the strangler-fig trees and mangroves. We live in Paradise, after all!