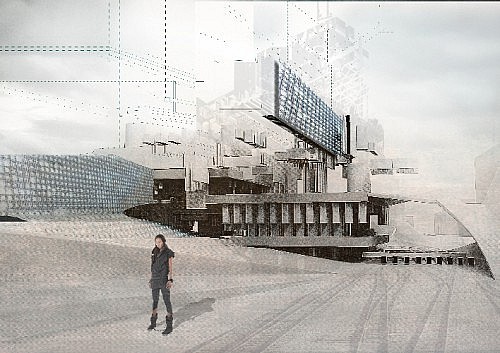 nomas_LA, the Spring 2014 Masters studio project presented by alumni Patrick O. Soares (M.Arch ’14) and Indra Alam (M.Arch ’14), has been featured on international and reputable media. The project was posted in eVolo, an internationally-renowned architecture and design journal,and on SUPER//ARCHITECTS, a prominent platform for showcasing work and ideas of the academic community. Below is Soares and Alam’s project statement.

“Our thesis project, nomas_LA is about testing post-apocalyptic urban strategies through interface – interface of human + machine and architecture + machine. It aims to negotiate friction between mechanical components and organic landscape. The landscape penetrates the mechanical. The user physically plugs into the structure, while the structure itself plugs into existing infrastructure (railroad track).

Analysis derived from research on the circuitry and motherboard of a computer, and the components within it, was used to inform the architecture on the site. The “capacitors” on the motherboard were interpreted as the existing structure on the site, the HUBS in nomas_LA feed from these capacitors. The HUBS will, eventually, fragmentally detach and plug into the next station to serve a different purpose from site to site, essentially becoming nomadic themselves. Hence the word “nomas” in the title (latin origin for nomadism). nomas_LA strives to question the possible future of operational, architecture, in motion.”

Soares considers nomas_LA a conglomeration of different aspects of his FIU education. He is proud to have chosen FIU as – what is now – his alma mater. “One of the reasons I decided to pursue architecture at FIU,” said Soares, “is because of FIU’s status as a research university. As such, at the core of its teaching philosophy is affording students the freedom to explore different answers or – perhaps even more important – how to formulate a different set of problems to solve.” In regards to the field of architecture and what he learned as an architecture student at FIU, Soares said, “It is more than putting a comprehensive building together. It’s about taking the critical thinking skills we learned not only in studio, but also in theory and in history, and intensely applying them towards an architectural problem and, by extension, a solution.”

“My contributions to nomas_LA are ultimately the result of skills I developed in…design studios, among other constructive courses,” said Alam. “During the three intense years of architecture studies at FIU I experienced great studio professors (such as Sabah Corso, Nick Gelpi, and, of course, my thesis instructor Eric Goldemberg) who afforded me the freedom to explore projects that pushed my creative limits.” Alam said that she is especially grateful to Professor Eric Goldemberg, who encouraged her to continue her work on hybridization of mechanical components and dynamic architecture, a major theme of nomas_LA. “It is truly rewarding to see our thesis project being supported by the architecture community and FIU.”

Eric Goldemberg, Associate Professor and the studio advisor of Soares and Alam’s nomas_LA said, “Patrick and Indra did a great job at engaging their last studio project as a thesis statement – a visionary project about the active role of architecture structures in a shifting ecology of future urbanity. Their view of technology as catalyst for social and physical mobility within the city was expressed both in their speculation about the emergence of nomad groups and the provision of infrastructure that adapts and enables the movement of platforms.” Goldemberg noticed the potential in these two alumni, considering them “a talented, self-motivated group of students.”