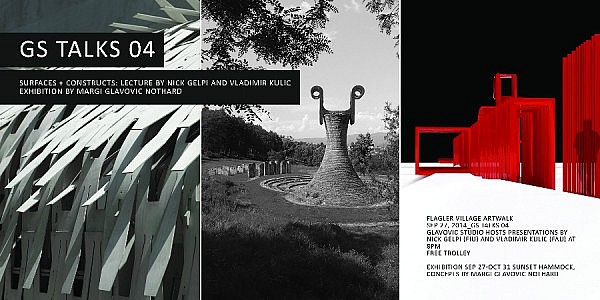 On Saturday, September 27th, the College of Architecture + The Arts’ Nick Gelpi, Assistant Professor, and Vladimir Kulic, Assistant Professor at the Florida Atlantic University School of Architecture, will be the guest speakers for GS TALKS 04. The talk is part of Glavovic Studio‘s lecture series, held during the Flagler Village Art Walk. The theme of this lecture will be Surfaces + Constructs.

The GS TALKS Series engages the public on critical societal issues being addressed through art and design. Past GS TALKS series have included community and design topics in the context of historic preservation, contemporary design, and art and the aesthetics of architecture as a quality of life tool for affordable housing. Funding in part for previous series has been provided by a Broward County Board of County Commission grant and Art Works. (Source: Glavovic Studio)

Nick Gelpi is an Assistant Professor in the Department of Architecture at Florida International University and the founder and Design Principal of GELPI PROJECTS, based in Miami. Gelpi’s practice has been actively engaged in a diversity of projects including experimental installations and pavilions, residential architecture, retail design, and high-concept furniture and prototypes. Gelpi’s research is concerned with materials and representation, often incorporating procedures of fabrication and the conventions of testing through material collaborations with mockups. Gelpi has worked professionally as project architect for Steven Holl Architects in New York City, and has previously taught at numerous schools of architecture including the Massachusetts Institute of Technology, Ohio State University, and Columbia University.

Dr. Vladimir Kulić is an Assistant Professor at the Florida Atlantic University School of Architecture and teaches courses in architectural history, theory, and design. He specializes in architecture after World War II, modernism in Central and Eastern Europe, the global exchanges of architectural culture, and contemporary criticism. He is the author of Modernism In-Between: The Mediatory Architectures of Socialist Yugoslavia (with Maroje MrduljaÅ¡ and Wolfgang Thaler, 2012) and of numerous articles on architecture in the former Yugoslavia. He is also the editor of Unfinished Modernisations: Between Utopia and Pragmatism (with Maroje MrduljaÅ¡, 2012) and of Sanctioning Modernism: Architecture and the Making of Postwar Identities (with Monica Penick and Timothy Parker, forthcoming 2013). Exhibitions he co-curated have been shown at the ArchitekturzentrumWien in Vienna, Swiss Museum of Architecture in Basel, Museum of Yugoslav History in Belgrade, Museum of Architecture and Design in Ljubljana, etc. Dr. Kulić won a number of international fellowships and accolades, including the 2007 Trustees Merit Citation from Graham Foundation and the 2009 Bruno Zevi Prize for a Historical/Critical Essay in Architecture. He is the 2012-13 FAU Scholar of the Year at the Assistant Professor level and the 2013 Fellow of the American Council of Learned Societies. (Source: Florida Atlantic University)

On the same night of the GS TALKS 04, Margi Nothard, Design Director of Glavovic Studio, will open the exhibition Sunset Hammock: Vision of the Everglades, A Viewing Portal_Tamarac Conceptual Public Art Project. The exhibition “renders saturated moments in time as the day reveals itself, increasing in intensity in color, view and connectivity to the largest subtropical wilderness in the United States.” The exhibition also “explores the expansiveness of the Everglades, the extreme juxtaposition of infrastructure transposed on the delicateness of ephiphytes, the integration of the wetland and the regeneration of systems, movement, [and] community placemaking with tectonic form.” The project is a concept for a public artwork in Sunset Point Park, Tamarac, and its next phase has been awarded an NEA Our Town Grant. (Source: Glavovic Studio)