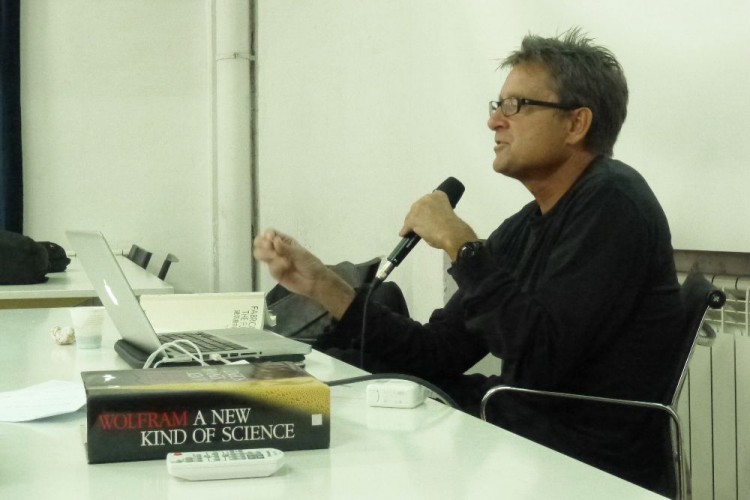 The Academia Europaea is a functioning European Academy of Humanities, Letters and Sciences, composed of individual members. Membership is by invitation, and invitations are made only after peer group nomination, scrutiny and confirmation as to the scholarship and eminence of the individual in their chosen field. Election is confirmed by the Council of the Academia. Members are drawn from across the whole European continent. Members also include European scholars who are resident in other regions of the world. Current membership stands at around 2,800. Amongst them are fifty-two Nobel Laureates, several of whom were elected to the Academia before they received the prize. (Source)

His first publication was a translation from the Latin of Leon Battista Alberti’s treatise on architecture,de re aedificatoria, undertaken under the supervision of Joseph Rykwert, and published as On The Art of Building in Ten Books (MIT, 1988). This experience taught him the importance of publishing and interdisciplinary thinking. With his first academic appointment at the University of Nottingham he shifted into a more contemporary theoretical arena, influenced heavily by ongoing research in Continental Philosophy in the School of Critical Theory. His second publication, Rethinking Architecture: A Reader in Cultural Theory (Routledge, 1997), a best selling collection of essays on architecture and urbanism by key thinkers of the twentieth century, such as Georg Simmel, Siegfried Kracauer, Walter Benjamin, Theodor Adorno, Michel Foucault, Jean Baudrillard, Helene Cixous, Jacques Derrida and Gilles Deleuze, informed many of his subsequent publications.

Invitations to teach at leading design schools, such as the Architectural Association and Columbia GSAPP, further influenced his thinking. As an academic who had always taught both design and theory, he began to realize the limitations of cultural hermeneutics from a design perspective, and to engage increasingly with the materialist philosophies of Gilles Deleuze, Manuel de Landa, and emerging scientific thinkers. These philosophies suggested a more constructive engagement with the world of technology in general and computation in particular. Many of his more recent publications have dealt with computational design theory. He is currently working with Behrokh Khoshnevis and others on a NASA funded project to develop robotic fabrication technologies for printing structures on the Moon and Mars. Neil Leach has published 27 books, which have been translated into several languages, including Chinese, Korean, Spanish, Portuguese and Romanian.

Neil Leach has particularly strong connections with China, where he holds a distinguished Chinese Government ‘High End Foreign Expert’ Visiting Professorship at Tongji University. He has served as Director of the American Academy in China, and has curated a series of exhibitions, including several for the Architecture Biennial Beijing.

As a student he was President of the Cambridge University Athletics Club, and the holder of Cambridge Blues in Track & Field and Cross-Country. He represented England at Track & Field over 1500m.