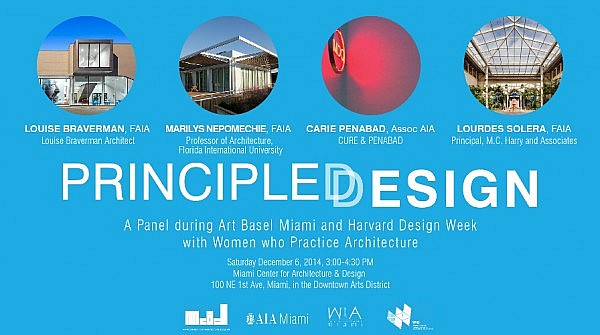 On Saturday, December 6th, 2014 at the Miami Center for Architecture and Design, Professor of Architecture Marilys Nepomechie was a panelist in Principled Design, part of the Harvard GSD | Art Basel Design Weekend.

In the field of urban planning, theorists including Henry Mayhew, Lewis Mumford, Herbert Gans, and Jane Jacobs, have integrated moral principles into urban planning, such as the aim to foster inclusive and equitable societies. Principled Design assembled women holding leadership positions in architecture practice and education to discuss the professional values they hold dear, and how those values frame their approach to design, education, and practice.

Emerging from discussions about the inclusion of women in design professions, Principled Design built upon related recent dialogues. For example, in March 2013, GSD Women in Design launched a Petition to the Pritzker Architecture Prize to recognize Denise Scott Brown for her critical role in the work that earned the 1991 Prize. Additionally, the Missing 32% Project is a nation-wide initiative that documents and seeks to redress the leaky pipeline for women in the architecture profession. In 2014, Julia Morgan became the first woman to receive the AIA Gold Medal, posthumously honoring a prolific, respected practice that spanned several decades during the first half of the 20th Century. As part of Harvard Design Weekend, Principled Design sought to extend the reach of that critical conversation.  It was conceived by Caroline James, GSD MArch ’14 and Jaya Kader, AIA, and advised by Denise Scott Brown.

This article was written by Marilys Nepomechie, Professor of Architecture.