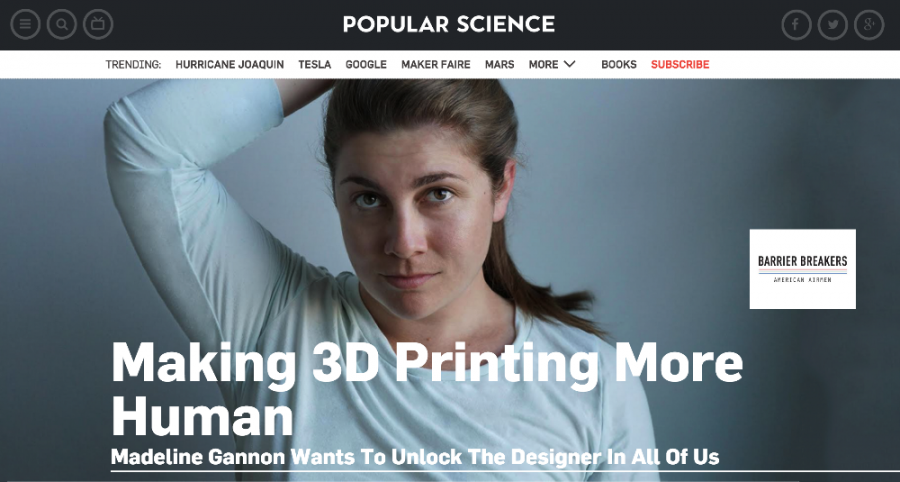 Alumna Madeline Gannon (M.Arch ’10) was featured on Popular Science for her work in 3D printing, her efforts to help expand the medium to the masses, and her new software “Tactum.”

Below is the text from the article featured on Popular Science. To read the article on the website, click here.

Making 3D Printing More Human: Madeline Gannon Wants To Unlock The Designer In All Of Us

Madeline Gannon is a researcher, teacher at the Carnegie Mellon University School of Architecture and Ph.D. candidate in Computational Design — but that’s not all. She is on a mission to open up the infinite design possibilities of 3D printing to the world.

“Currently you have to have a lot of technical background in order to participate in creating things for 3D printers,” Gannon says. “There is still a huge knowledge barrier for how we create digital models.”

As the technology has advanced, prices have plummeted, and now anyone can buy a 3D printer for a few hundred dollars, Gannon notes. However, not just anyone can create original designs for 3D-printed artifacts.

To put true creative power into the hands of any ordinary 3D printer owner, Gannon has developed an innovative new system called “Tactum.”

Tactum is a new type of software that lets users create their own unique designs for 3D printers by simply touching a projected image.

Using their innate hand gestures, someone using Tactum can poke, rub and otherwise manipulate the projected image that will become their 3D printed object, and see it instantly change shape in response.

In keeping with the goal of democratizing the process, Gannon designed her first series of Tactum artifacts on a surface that everyone can access freely and manipulate instinctively, that being the human body.

“My goal was to bring the digital out to the physical world and out onto your body,” says Gannon.

Along with a companion project called Reverb — which translates these user-created designs into printable meshes — that impulse has resulted in a spectacular diversity of bracelet and necklace designs, ranging from smooth landscapes, intricate textures and chaotic free forms to delicate geometries derived from the 19th century art of chronography.

Fashion is only the beginning. The real fireworks start when Tactum is deployed for function.

Again turning to the familiar, Gannon’s first functional artifact was a custom watchband for a Motorola Moto 360 smartwatch.

One of her future goals is to use Tactum for customizing prosthetics and other wearable medical devices.

Gannon envisions doctor and patient collaborating with a Tactum technician in real time, with the patient providing instant feedback on the fit and feel of the device.

Since Tactum can potentially produce 3D-printed objects more quickly, at lower cost, doctor and patient could continually adjust a prosthetic limb as needed, while enabling a high degree of personal expression.

Tactum also has potential in the classroom, and the system reflects Gannon’s insistence on teaching tools that help learners dive right into the creative process.

Later this year, she will be an artist-in-residence at the leading 3D software design company Autodesk Research, a collaborative supporter and the funder behind Tactum.

Gannon expects her stay at Autodesk to be “like a kid in a candy shop,” with access to every imaginable CNC fabrication device — a machine commonly used by machinists and craftspeople to create moldings and other architectural elements.

She plans to work with researchers there on applying Tactum to prosthetic devices, and to create new skin-based artifacts including, perhaps, a “full body thing.”

Based on Gannon’s work so far, the Autodesk experience is bound to result in the unique, the spectacular, and the breaking of even more barriers.

THE MAKING OF A MAKER

Gannon’s focus on opening up access to knowledge is rooted in her memories of visiting museums as a high school student.

The museum trips also inspired Gannon to pursue an academic path that eventually lead her to 3D printing and the collaborative work of her design collective, MADLAB.CC.

“In high school I went to museums, and I noticed myself admiring the building more than the exhibits,” she says. “That gave me a hint that architecture was something I wanted to get into.”

Gannon progressed all the way through to the last year of architecture school before she had an epiphany, brought on by an encounter with a CNC router. Gannon found the experience of getting instant, physical results for her designs to be “intoxicating.”

There was just one problem. Gannon soon encountered the limit of the human-computer interface, and she found herself unable to transform her thoughts into action.

That desire drove Gannon to immerse herself in computer science, and now she finds herself at the leading edge of the “awkward space between computer science and the design realm,” exploring the future of digital making.

Gannon sees that future as an exciting, accessible one, where “everyone is an amateur, everyone is a beginner,” and people share their knowledge in a community of creators.