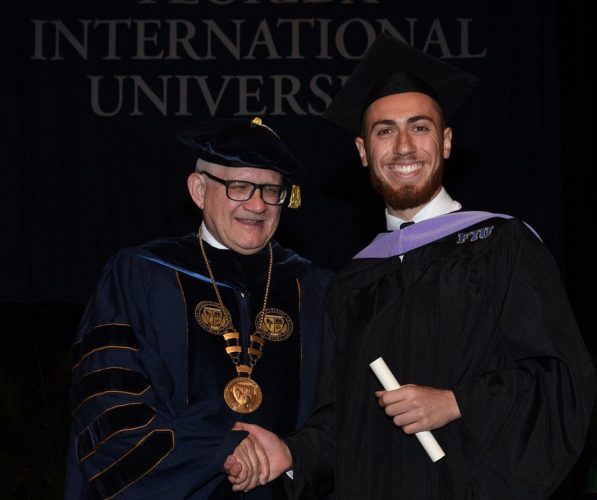 For the past five-and-a-half years, anti-regime protests and escalating violence have spiraled into an ongoing civil war in Syria. An estimated 250,000 civilian lives have been lost throughout the bloody, armed conflict and millions have been forced to seek refuge abroad.

In the midst of the Syrian Civil War, Hadi Alhaffar, an architecture student at the University of Damascus, kept busy focusing on his studies. He had left his hometown to follow his passion at the capital’s university thinking it would be safer.

However, in March 2013 a mortar shell went off and crashed into the School of Architecture, killing and injuring multiple students. When Hadi’s mother heard the news about the university bombing, her shock led to a stroke and hospitalization.

During her recovery, Hadi realized that the University of Damascus could no longer be his sanctuary.

While researching prospective universities in Spain, Italy, and Germany Hadi got a call from his uncle residing in South Florida who mentioned that his children were pursuing their studies at a local public institute – Florida International University (FIU). Shortly afterwards, Hadi decided to join his cousins in Miami and become a FIU transfer student.

Once accepted into the Department of Architecture, Hadi proved his outstanding scholastic standing and dedication to the trade. He participated in a National Science Foundation funded cross-disciplinary project – SKOPE; created a 360-degree interactive art installation entitled, Nuage; and co-founded his entrepreneurship, called Instarender, a company that specializes in creating architectural 3-D renderings.

After completing four years at FIU, he earned his Masters of Architecture and received the privilege of being recognized as a “Worlds Ahead Graduate” at this past Spring 2017 Commencement Ceremony.

“It is warming to be nominated by my professors for this award and to be recognized for the hard work that I myself often forget to appreciate during the challenging times. Being chosen from an already great body of students at FIU is an honor, and is a reminder to myself that obstacles are only in the mind,” said Hadi humbly.

Although, his family could not be present at the ceremony due to U.S. Travel Ban, they are very proud and delighted to see how Hadi benefited from the opportunities offered by FIU and the United States.

“Eager to begin my work, I am now ready to take the knowledge and skills that I have attained at FIU and turn them into innovative ideas and projects which will have a great impact and contribution to our world as a whole,” said Hadi.

Despite the difficulties, and the unforeseeable future of Syria, graduation marks a pivotal point in Hadi’s life. Now, he gets to represent his native land and give a positive contribution to his trade.

In the future, he plans to return to FIU and give back by inspiring and mentoring students, and continuing to advance the research at the FIU Department of Architecture.

“Being a Worlds Ahead graduate is a great honor and a standard that I will follow for the rest of my life,” he stated.

Hadi gives special thanks to Professor Shahin Vassigh for developing a technology research department at the school of architecture, to the reputable faculty and to his peers.