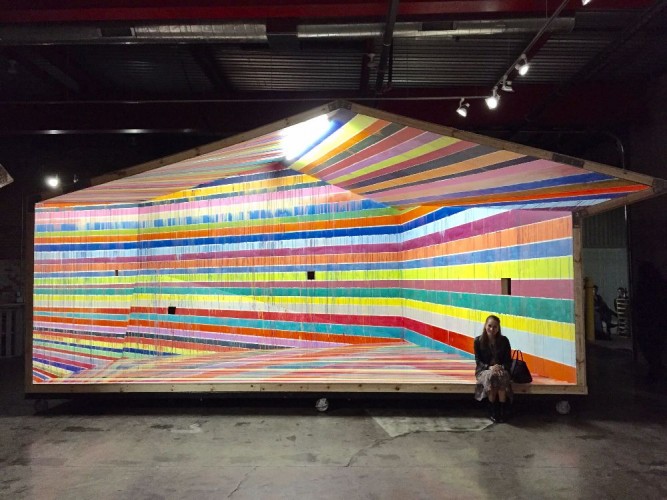 GELPI Projects, founded by Architecture Assistant Professor Nick Gelpi, won an Honor Award of Excellence on Friday, October 30th, at the 61st Annual AIA Miami Design Awards, which was hosted in the John S. and James L. Knight Concert Hall at The Adrienne Arsht Center for the Performing Arts. GELPI Projects won the award in the category of Divine Detail for “House Paint Pavilion,” an installation created with painter Markus Linnenbrink for the opening exhibition of Wasserman Projects in Detroit.

“House Paint Pavilion” is 24-by-25 feet, with interior dimensions of 25-by-16 feet, which makes up the approximate size of a small house. This pavilion was designed to be painted. Conceived of as an inhabitable painting in the shape of a house, “House Paint Pavilion” blurs the surfaces between the walls of a building and the painting displayed upon it. On the exterior, the painting bleeds through the surface as a series of engraved lines, which mimic the appearance of unusually configured exterior house siding. Visitors are invited to enter or to explore the outside of the pavilion and peek inside through small windows strangely positioned around the exterior. Each of the individual openings frames a unique perspective of the pavilion’s interior, creating multiple unique views extracted from a single composition based on privileged perspectives in space. (Source) 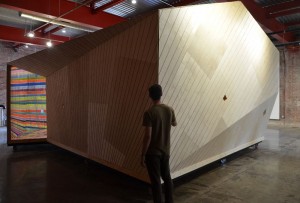 The pavilion is built in two symmetrical halves on a steel frame with Detroit-sourced industrial casters and is designed to be split open or pushed back together along a central seam. When opened, the two halves create a space in-between, allowing the surrounding environment to flow into the pavilion. When together, they create an interior environment. (Source)

The pavilion is constructed of standard residential wood framing on 16-inch spacing, joined with laser-cut steel gusset plates.  Birch plywood panels were machined with grooves on the exterior displaying the underlying composition of the interior painting. (Source)

The jury that decided to award GELPI Projects the AIA Miami Honor Award of Excellence said of “House Paint Pavilion”: “The contrast of the two drives the interest, but what holds the interest is the attention to detail, how the lines track…how they conform to construction at the exterior, and how they ignore the construction and even bleed between the lines at the exterior.”