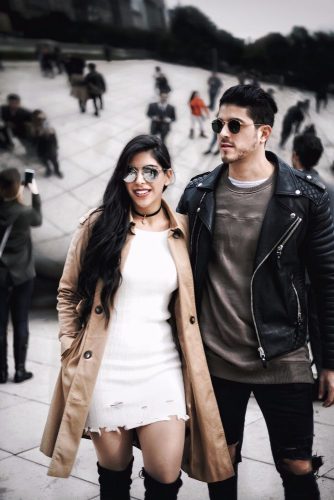 TwoTrends, Inc. is a combination of a zeal for fashion trends and a blend of architectural visualization and critical thinking. The his-and-her blog has attracted more than 200,000 followers since its inception in October 2015. It includes fashion and beauty tips, as well as the couple’s day-to-day interests.

What started off as a small fashion and lifestyle blog has become a major full-time business working with brands like GQ Magazine, Lacoste and many others. The two have been featured in the June 2016 GQ Magazine edition and Marie Claire Magazine and hosted in the 2017 Billboard Latin Music Awards.

“Just like an architect has to envision a building before it’s built, we envision where we want to take TwoTrends,” said Gomez.

The two met at their local church and started their blog while at FIU. Despite studying two different careers, both possess similar creative aspects. While Hernandez handles writing, Gomez leads in the creative visual direction.

Hernandez said they chose to pursue an online platform first because architecture and journalism are both demanding and competitive careers. She said social media is a way to jump-start in any industry through networking opportunities, which is valuable for consumers and brands.

“We’re really blessed to have started as students. Since you can make your schedule, we were able to use our spare time to create content because now it’s a lot harder to get into this industry,” Gomez said.

Gomez said they have been on-air with Telemundo and were able to obtain internships because of their online presence. He also said Miami is an ideal place to excel in media because of the many ways to network and create a unique platform of consistent readers, followers and fans.

The couple said they were inspired at FIU because of its different facilities and supportive faculty. Gomez said its Miami Beach Urban Studios (MBUS) provided a hands-on experience in learning software and photography, helping him lead in the design of TwoTrends.

“FIU had an amazing facility at MBUS and I actually took two semesters out there, which was quite a drive, but it was worth it because I got to see the technology and really learn a lot,” he said.

“Although an 18-to-25-year-old student may not have his career plans defined, FIU gave us the proper resources and encouraged us to always think worlds ahead.”

Architecture Professor Malik Benjamin said he and Gomez had conversations during class on the importance of having an entrepreneurial mindset to have an immediate impact on “the real world.”

“Sebastian represents the elite group of students who take their education seriously. Based on what we spoke, I am not surprised in the very least that he has met with the success he has and I hope more students follow suit,” said Benjamin.

Hernandez said that connecting with professors is a great way to explore projects and that they encouraged them to pursue the blog. Like in the journalism industry, she works on social media, creates websites and provides content, such as stories, videos and images for their platform.

Journalism and Media Professor Lilliam Martinez Bustos said she remembers Hernandez’s enthusiasm to meet people in the industry and to learn from professionals. She said TwoTrends shows how students acquire skills in FIU to be able to find their own space and build a career for themselves.

“Espe was always very active and she understood the weight of having an internship and just plain being out there,” Bustos said.

Hernandez and Gomez said their greatest challenge was creating TwoTrends from scratch when they had zero followers on social media. Now they hope to transition more into video for their YouTube channel, which can open doors to do mainstream media.

“When we started our blog, it was mainly about clothes and style, but as we began to grow, we saw that fans and followers were interested in us – In what Sebas and Espe do, where we hang out, what we eat, where we travel and what we are wearing,” Gomez said.

The pair advise people who are interested in creating an online presence to focus on what makes them unique from everyone else and use resources, such as social media, a website and photography, to create content often. However, going to events and connecting with others is most crucial.

“If you have to hustle it, hustle it. Don’t be scared and just do it.”

PrevPrevious StoryFIU SCJ is awarded $100,000 grant from Ware Foundation for Eyes on Your Mission Academy
Next StoryDepartment of Architecture Students Receive 2017 Villagers ScholarshipNext