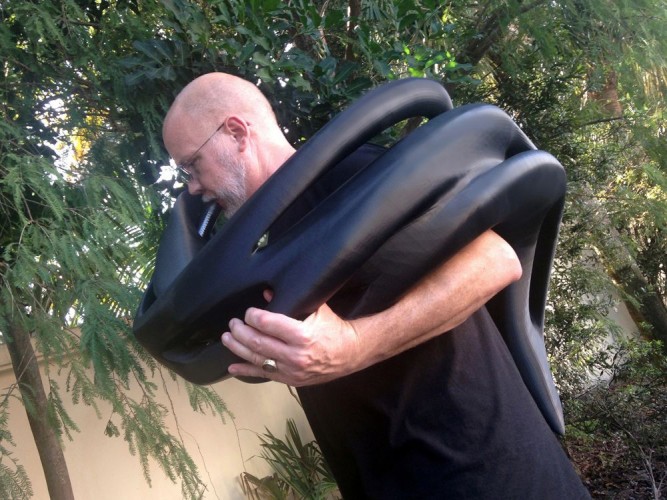 Associate Professor Eric Goldemberg and MONAD Studio partner Veronica Zalcberg have been featured on CNET for the firm’s work in 3D-printed musical instruments.

CNET reported on MONAD Studio’s new, 3D-printed Hornucopian Dronepipe, which forms part of “MULTI,” a sonic installation designed by the firm in collaboration with musician/luthier Scott F. Hall. “MULTI” consists of a 5-by-2-meter framework that holds five 3D-printed musical instruments: a 2-string piezoelectric violin, a 1-string electric travel bass guitar (monobarasitar), a 1-string piezoelectric monovioloncello, a small didgeridoo, and a hornucopian (large didgeridoo). Three performers can play live the five instruments, as well as the sonic wall. The sonic wall serves as a bandshell and as the instruments’ rack. The framework itself is also another instrument which produces a drone, sonic environment that highlights the radical design of these instruments.

Michelle Starr of CNET wrote, “The sound [the new Hornucopian Dronepipe] produces is deep and resonant, a sonorous tone that is simultaneously somber and stately (and a little on the eerie side). It’s not hard to imagine the acoustic vibrations engulfing the player’s body as they blow into the mouthpiece.” (Source)

To watch musician/luthier Scott F. Hall perform with the Hornucopian Dronepipe, click on the video below.

MONAD Studio is integrating architecture and music with the collaboration of seven FIU Architecture student (Jack Garcia, Stephanie Colon, Zoe Russian, Stephany Guinan, Albert Elias, Hex Ceballos, and Manuel Perez-Trujillo). This is an interdisciplinary project with Scott F. Hall to create a sonic installation, and it is part of Professor Goldemberg’s research project for his upcoming book FEEDBACK: Architecture + Music, under contract with eVolo and distribution by ACTAR.

The featured image is provided courtesy of MONAD Studio.