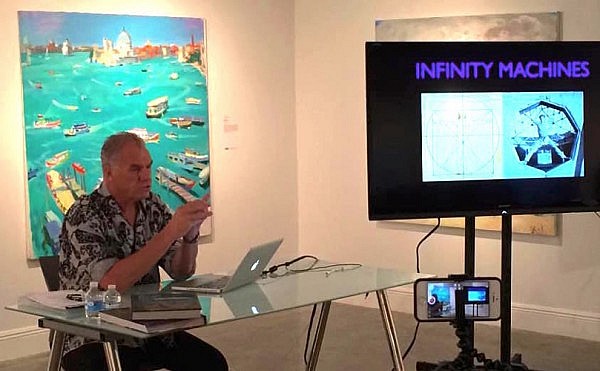 College of Architecture + The Arts Dean’s Fellows Alastair Gordon and Bruce Carter hosted special events at the Miami Beach Urban Studios and at the Wertheim Performing Arts Center on Wednesday, November 12th. Both events were attended by enthusiastic crowds.

Alastair Gordon (author, curator, critic, filmmaker, publisher, and public speaker) held a talk at the College of Architecture + The Arts | Miami Beach Urban Studios called Infinity Machines and other Radical Environments of the Psychedelic Sixties. Gordon discussed the “revolutionary and alternative ways to live, love, and entertain” that started in the sixties, and the radical spaces constructed to house these lifestyles. He has written a book about this subject, as well, entitled Spaced Out: Radical Environments of the Psychedelic Sixties:

Stimulated by the psychedelic drug culture, rebel designers and architects distorted space to create womblike coves and isolation chambers, forging a spatial vocabulary that still reverberates today. At the same time, the tune-in-turn-on-drop-out message lured youths into far-flung communes, often under the roofs of brightly painted geodesic domes draped and tie-dyed fabric. Idealistic and anarchic enclaves with names like Drop City and Morning Star redefined the concept of community, inventing a wildly spontaneous way of building and dwelling. For the first time, these ephemeral spaces are brought together in Spaced Out. The many never-before-published photographs and an inventive text by acclaimed author Alastair Gordon show in detail the spirit and ideas of this radical period. (Source: Amazon)

Bruce Carter (arts educator, researcher, and National Council on the Arts Member) moderated the panel discussion Interdisciplinary Approaches to Understanding the Creative Experience at the FIU Wertheim Performing Arts Center. The participants in the discussion included architect and FIU Professor of Architecture Eric Goldemberg, artist Michael Scoggins, and composer Carson Kieveman. Each participant expressed the interdisciplinary aspects of his own creative process within his field. To add to the exciting topic of discussion was the technology involved in the event: Scoggins joined the panel from Brooklyn with the help of Google+ Hangouts.

For more information on the College of Architecture + The Arts Dean’s Fellows for 2014-2015, click here.