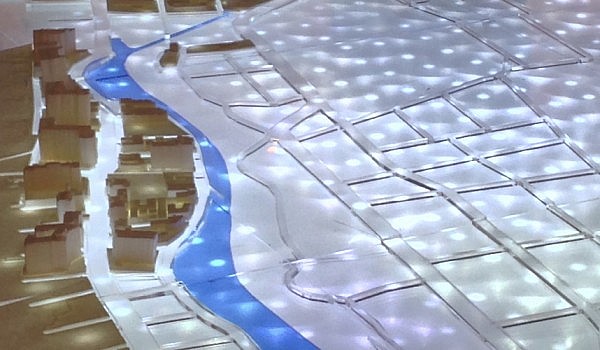 Behind the ‘Miami 2100’ Model at Coral Gables Museum

If you’ve visited the Coral Gables Museum recently, you might have seen a new exhibition by students from FIU Architecture and FIU Landscape Architecture + Environmental and Urban Design. Miami 2100: Envisioning a Resilient Second Century is co-curated by FIU College of Architecture + The Arts faculty Marta Canavés, FIU LAEUD Associate in Design and Marilys Nepomechie, FAIA, FIU Professor of Architecture. The exhibit takes a comprehensive look at the topic of climate change and sea level rise, with a focus on our region and the history of research on the topic.  (For more information, click here.)

The city model in the exhibition is perhaps the most obvious part of Miami 2100. Measuring 25-feet-long and 17-feet-wide, the model fills up a whole gallery room at the Museum and incorporates lighting and sophisticated design. FIU Architecture Instructor  and Fabrication Lab Manager Eric Peterson, working with a team of architecture and landscape architecture students, configured the exhibition galleries and constructed this large-scale model of Miami, depicting the predicted effects of sea level rise on the city. Peterson offered a background on the making of the model.

Teams Behind the Miami 2100 Model

The team of students and faculty began working on the Model in June 2014. The initial study models were produced over the summer by Tom Pupo and Daisy Nodal under the direction of Eric Peterson. In the fall, Peterson and four fabricators developed the final design of the model. The team consisted of student team leader Julia Sarduy and Erika Olson, Monica Cordera, and Claudia Fernandez. A team of 3D modelers developed files for 3D printing the buildings and laser cutting the land masses, roads, and infrastructure. This team, lead by MAA student Marny Pareda consisted of Dontavious Pittman, Bobbi Walker, Miguel Pio, and Branko Micic. This team was equally instrumental in developing the final design of the model. All teams met regularly with Professor Nepomechie and Professor Canavés to review the design and ensure that we were able to produce a model that demonstrated the information and ideas that they wished to convey.

The Design of the Miami 2100 Model

It was important for the teams to find a way to show how close to sea level Miami lies. Professor Canavés and Professor Nepomechie were clear in their desire to show as much of the city as they could, from Miami Beach to the airport. The teams chose to work at 1 inch = 200 feet, as it was the best compromise that allowed them to show the city, the infrastructure, and the buildings in a way that a viewer could easily understand. This resulted in a model that is 25-feet-long and 17-feet-wide. Because Miami is so flat and ground elevations vary so little, it is nearly impossible to depict variations in height in a model of this scale in a way that has any meaning for the viewer. To show how close to the water Miami lies, the teams chose to use sanded clear acrylic for the ground. They raised this acrylic surface an inch above the base of the model and then cut out shapes of land masses, rivers, bays, roads, and other infrastructure elements in clear and colored acrylic. 3D printed buildings were then placed on top of the translucent ground. The result is that the city appears to lie low to the water and hover gently above the sea.

To show variations in sea level, the teams used a Geographic Information Systems Map that relied on LIDAR data to plot elevations of the city of Miami that corresponded to the area of our model. From this data they produced a computer model that displayed a grid of points depicting the areas of the city that would be submerged due to various levels of sea level rise: 3 feet, 4 feet, and 6 feet. Teams used these points to drill holes using a CNC machine and inserted over six thousand LED lights wired in three separate electrical circuits. By pressing a series of buttons on a wireless remote, visitors to the museum can see which areas of the city will be inundated by 3 feet, by 4 feet, and finally by 6 feet of sea level rise. The lights shine from below the sanded clear acrylic, giving the impression of a rising force that becomes quite dramatically overwhelming when the final button is pushed, showing six feet of sea level rise. At this point, all of South Beach is inundated as well as much of downtown Miami. The Miami River widens considerably and the airport is almost completely submerged.

Despite the overwhelming aspect of the city model, the work, along with the rest of the Miami 2100 exhibition, “is met with scientifically grounded optimism,” as noted in the exhibition narrative. Miami 2100 provides a solution grounded in “architecture, landscape architecture and urban design strategies that can support the adaptation and transformation of existing infrastructure, neighborhoods, structures and regulations to ensure resilient future development.”

The Miami 2100 model was produced entirely by FIU students using funds from the Cejas Family Foundation and the National Science Foundation.