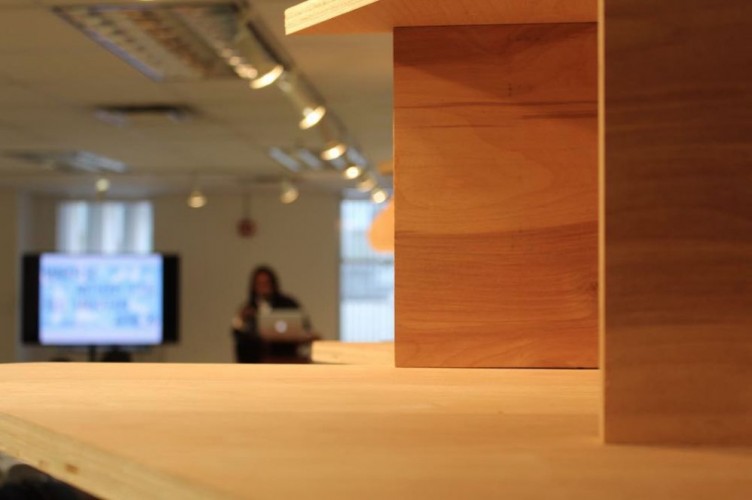 The photographs in the gallery above are provided courtesy of Michael Flores.

Anthony Titus is the founder of Anthony Titus Studio, an interdisciplinary practice based in New York City. His studio has been a laboratory for the exploration of ideas related to the contemporary practices of art and architecture. Over the past decade the studio has been responsible for numerous experimental projects, including built works, site-specific installations, and exhibitions of paintings and sculptures. (Source: Rensselaer | Architecture)

Anthony Titus is an Assistant Professor in the School of Architecture at Rensselaer. Over the past decade, he has taught architecture at numerous schools including The Cooper Union for the Advancement of Science & Art and Pratt Institute. In addition to serving as a member of the faculty of these institutions, he has served as a guest lecturer and critic at institutions throughout the United States, including Cornell University, Columbia University, The New School for Social Research, Yale University, Art Center, SCI-Arc, Harvard GSD, and the University of Pennsylvania. (Source: Rensselaer | Architecture)

In 2006 Bloomberg and Art In General awarded Anthony Titus Studio a joint research fellowship, resulting in the construction of a long-term site-specific installation within Bloomberg Financial Headquarters in New York City. Since then, Titus has gone on to have numerous solo exhibitions, while participating in many group exhibitions both in the United States and abroad. (Source: Rensselaer | Architecture)

Titus has had two recent solo exhibitions in 2014 at Cornell University (Surface Mining) and the University of Wisconsin (Marginal Tactics). He has also been involved in several recent group exhibitions, including 2015’s Vienna for Art’s Sake! curated by Peter Noever and 2016’s 5×5 at the University of Illinois – Urbana Champagne, Measure at the Storefront of Art and Architecture in New York City, and Accrochage at Friedman Benda in New York City.

Titus is also the recipient of a 2013 research grant from the Graham Foundation for Advanced Studies in the Fine Arts. The project is titled “Twisted Siblings: Relationships Between Contemporary Painting and Digital Architecture.” The content of /Blu/ Migration at the Miami Beach Urban Studios is directly related to this project.